At first glance, Hong Kong seems an enviable hub for bibliophiles: It’s home to a buzzing book fair, a well-regarded literary festival, two creative-writing programs and Asia’s most prestigious literary prize. But in terms of bookstores, it has so far lagged behind other Asian cities such as Tokyo, Taipei and even Bangkok.

That may be about to change with the arrival of Eslite, a Taiwanese bookstore chain famous not only for an extensive collection of books but also in-house art galleries, cultural events, designer products and cafés.

On Saturday, Eslite opens in Hysan Place, a mall in Hong Kong’s Causeway Bay district. The three-story shop will stretch to 41,000 square feet, making it the city’s largest bookstore, and will stock some 100,000 titles that readers can browse and buy seven days a week. On Thursdays, Fridays and Saturdays, the store will be open 24 hours a day—perfect for night owls in a city that doesn’t sleep.

Eslite was founded in 1989, the year after Taiwan’s military dictatorship lifted a ban on newspapers and magazines, and it went on to become a patron of the island’s cultural renaissance. Its 48 branches host more than 3,000 activities a year, including lectures, readings, concerts and art exhibitions. 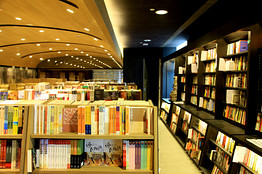 The Eslite store in Causeway Bay will stock 100,000 titles.

Founder Robert Wu, who ran a successful catering business before opening the first Eslite on Taipei’s Dunhua Road, kept the bookstore afloat for 17 years before it became profitable in 2006. “Eslite is a cultural phenomenon,” he said in Hong Kong at the Design for Asia Awards last December. “It’s all about the people, the place, the culture.”

Eslite will mark its entry into Hong Kong with two exhibitions and 30 activities over the next month, including sessions with local authors such as cultural critic Ma Ka-fai and a concert with singer-songwriter Chet Lam.

Like its flagship branches in Taiwan, the Hysan Place location will include a music and video boutique, stationery, a teahouse, a coffee shop, an art gallery and an event room. English- and foreign-language books will make up 40% of the selection, compared with 25% at most Taiwan stores.

Meanwhile, the store’s opening has prompted other local bookstores to up their game with renovations and an expanded selection. Commercial Press, Hong Kong’s biggest bookstore chain, has retrained staff, renovated its Causeway Bay branch and doubled its selection of English-language books.

Though Eslite’s expansion has garnered buzz, some cultural critics are greeting the chain with ambivalence. Au Wai-lin, founder of Hong Kong journal “C for Culture,” worries about its impact on independent bookstores, which specialize in nonmainstream books and titles banned in mainland China—genres that Eslite has excelled at selling in Taiwan.

“It may be an exciting event for many people and most of the media coverage is positive,” says Ms. Au. “But what I’m concerned about is it’s probably [leading to] a crisis of the existing local bookshops.”

Others take a rosier view. “In general I think it’s a good thing, because they will be hosting lots of cultural activities, which could help the cultural scene in Hong Kong,” says Daniel Lee, co-owner of Hong Kong Reader, a Mongkok bookstore that holds regular discussions and readings.

“We see more and more people into reading,” he says. “More people are paying attention to politics and social issues, and when people want to do something about it, they need to read about it first.”