A publication that offers lessons about writing and process and depth of coverage.

“The time I remember is when I’m about 8 years old,” writes Victoria Blake in a recent issue of Creative Nonfiction. “My mother is serving pork chops 1950s style — bone in, with a little bit of applesauce. In my family, I’m known as a ‘picky eater.’ For example, I eat only the very outside of the meat because the bone terrifies me. There’s a chalky spot in the center which — I know now but didn’t know then — is marrow.

“The bone is unyielding and hard,” Blake continues, “under the tines of my fork — a hardness that, in an instant, conjures the image of a whole skeleton, then an animal walking, an animal eating, an animal living. And that’s when my mother says it: “You should know where your food comes from, Tory. If you don’t eat it, you won’t get any dessert.”

Read the rest at Editors Only

At the beginning of this year I wrote a post for that treasure trove of writing and publishing information, Writing.ie, about why you should finish your damn book. You can read that post here. It proved really popular. So popular that it seems to me like a lot of you are in the same place I was until last summer: wanting nothing more than to have finished your book, but finding yourself doing everything but writing it.

It’s all well and good for me to tell you why you should finish your book (nutshell: a finished book is the one thing everyone who ever got published/successfully self-published has in common) but how do you do it? How do you overcome procrastination? How do you finish your damn book?

I only know what worked for me, but maybe you’ll find something in there that works for you. Let’s see…

From the good folks at WritersWrite

I have been posting articles about writing novels for a long time. Regular Writers Write contributors, Mia Botha, Anthony Ehlers, and I add weekly blogs about writing techniques and writing routines, but some things never change. There are always certain ways to make your novel more memorable. Here are 17 tips for writers who want to do just that. 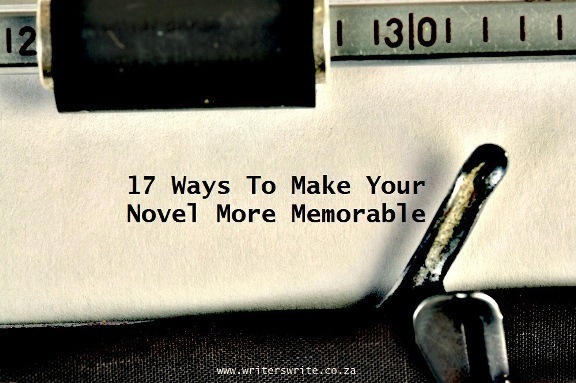 Read the rest at WritersWrite

Do you have problems finding just the right title for your book? You could try taking a leaf out of two of the best-selling books of this year and last year which have titles inspired by Shakespeare and The Bible.

Those two books are The Fault In Our Stars by John Green and Go Set A Watchman by Harper Lee.

Green’s YA smash has sold at least an astonishing 12 million copies and the title comes from Shakespeare’s Julius Caesar (Act 1, Scene 2):

Cassius: The fault, dear Brutus, is not in our stars,

But in ourselves, that we are underlings.

The title of Harper Lee’s sequel to To Kill A Mockingbird, coming out in July with an initial print run of two million, has its origins in the Bible (Isaiah 21:6):

For thus hath the Lord said unto me, Go, set a watchman, let him declare what he seeth.

Read the rest at Roger Packer

Editors find it convenient. But can it be trusted?

–“We use it for background…”

–“I personally only use Wikipedia as a jumping off point…”

–“I use Wikipedia primarily for a quick check on information…”

These are a few comments last month’s survey elicited from editors. Admittedly, I use Wikipedia a lot myself, too.

I remember some years ago offering statistics I picked up from Wikipedia while making a point to my physician. She responded, “Where did you get that from?” She sneered when I said Wikipedia. At the time I thought to myself that this doctor was behind the times in ignoring such a great new information resource as Wikipedia.

But after preparing this two-part series for Editors Only, I’ve learned to use Wikipedia with a great deal more caution. I don’t trust it as much as I used to.

A fundamental premise of Wikipedia is that anyone can become an editor at will. Any such editor can enter new information or change text that is already there. Supposedly, through an ongoing process of editing and reediting by various people, a better encyclopedia article will eventuate.

That is probably a good premise if all the editors are doing is polishing the language so that it can be better understood by readers. Beyond that, the process can be problematic. This is particularly true when large segments of the editing population see facts differently.