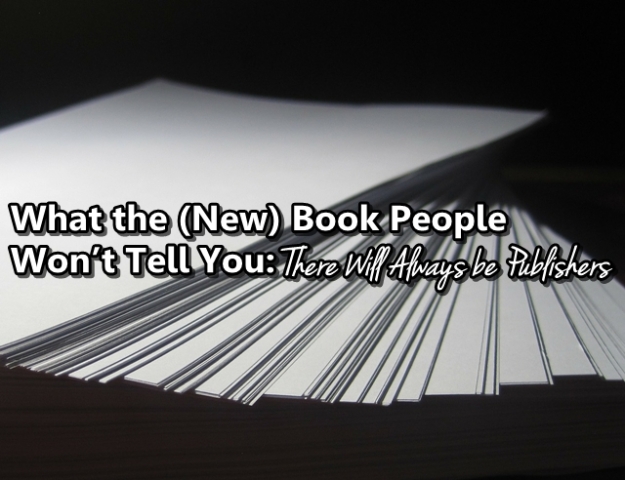 A couple weeks back I got on a tear about things Book People won’t say, including that B&N has been doomed by its senior management and digital is killing print.

Today I would like to turn it around and share something that isn’t said enough in self-publishing circles.

There will always be book publishers.

It is axiomatic in certain circles that in 2017 that authors have all the power.  Authors can hire they help they need and take their work direct to market, thus removing any need for a publisher.

While all of that is true, it does not automatically follow that book publishers are going the way of the dodo.

One detail that is often overlooked is that not all authors are equally imbued with the business skills – or the interest – required to publish their work and maximize revenues. There will always be some author who would rather focus on writing and hire someone else to do the packaging and selling.

I use the word “hire” in this situation because authors do have a lot of power, and they can easily walk away from the traditional publishing contracts that took all rights forever and ever, including rights for formats didn’t even exist yet (cough Julie of the Wolves cough).

Instead, indie authors are looking for publishers who have skills and abilities authors lack. For example, most indie authors can’t effectively access the print market, which is why some authors like Joe Konrath are signing print-only deals with publishers like Kensington.

So yes, ten years from now we’re going to be able to point to something and call it a publisher. We’re probably going to even have many of the same names then as now – after all, there is value in a publishing brand – but that’s no guarantee that the future publishers will be the corporate descendants of the present publishers.

In the same way that the major publishers have killed themselves by ignoring ebooks, other publishers are rendering themselves irrelevant by refusing to adapt to the times.

In 2017, publishers need to be nimble and responsive. The most successful publishers are going to be the ones that find out what readers want and try to provide it ASAP.

One way to do that is through reader analytics – understanding what readers are actually doing with their ebooks. Unfortunately, publishers just aren’t willing to change their processes in order to use the data.

Micah Bowers, founder of Bluefire Reader, pointed this out yesterday when he tweeted that Bluefire was shutting down its analytics platform:

Correction: Pubs knew what to do, just not how to change their culture/structure – which would have been necessary.

Analytics is not a magic wand; it is a tool that can be used to identify and respond to market demand.

The publishers who learn how to use this tool are going to run rings around the ones that do not.

The same is true for authors. If you’re not using analytics then you need to learn, because those who don’t learn this (or can’t, or won’t) will end up paying those who do.

Which would you choose?