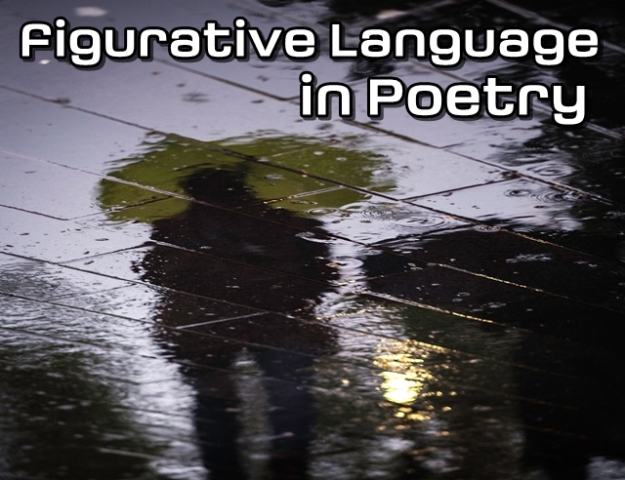 In poetry, we frequently use figurative language, because it can be more meaningful, vivid, and expressive.

Let’s take a closer look at figurative language and how we can best use it in poetry writing.

Most clichés are figures of speech: He’s as old as the hills. She’s a diamond in the rough. I was scared to death. You have nerves of steel. All of these statements are clichés, and they’re composed with figurative language. He’s not really as old as the hills. She’s not really a diamond. I’m still here, so I couldn’t have been scared to death. And your nerves might be strong, but they’re not actually made of steel. None of these statements are meant to be taken literally.

Here are just a few reasons figurative language is so effective:

Many literary devices, which are common in poetry, employ figurative language. Here are a few examples:

Metaphor: presenting one thing as something else, usually for demonstrative purposes: She’s a rock.

Personification: ascribing human qualities to nonhuman objects and animals. My computer is lazy.

Satire: criticism through humor, often using irony and overstatement. Jonathan Swift’s famous essay “A Modest Proposal” criticized the British treatment of the Irish by suggesting they cook and eat Irish infants, essentially saying, “We treat them so poorly now, we might as well eat their babies.”

Symbolism: something that represents something else and is used to enhance a theme, evoke emotion, or establish mood in a narrative.

Synecdoche: A type of metaphor in which a term that refers to one element of something is used to refer to the whole thing or vice versa. Synecdoche is often used for personification. An example of synecdoche is referring to businesspeople as suits or to a car as wheels.

Among the many tidbits of advice that young and new writers often receive is to avoid clichés. This is especially true with figures of speech, which tend to be widely used and can sneak into our writing. A phrase that feels like an ordinary expression may actually be a worn-out cliché. Look for fresh ways of using figurative language to express your thoughts in poetry.

Practice using figurative language by reviewing your own poetry and looking for phrases and expressions that might work better in figurative terms. As an exercise, set a timer for ten minutes and come up with as many figurative expressions as you can to invigorate a line or phrase from your poem, and then use whichever one works best.