Knowing how to end a novel is an essential skill for fiction writers. Story endings often stay with us as readers – especially when they’re satisfying, haunting, clever or profound. Here are 7 ways to end a novel. May they inspire you to find the best closing for your story:

3. Pull the rug from beneath their feet: Shocking twist endings

5. Build in ‘what next?’ – Cliffhanger endings

Let’s explore each of these story ending types in greater detail:

Leaving your story open-ended is an interesting but risky approach. Open-ended closing chapters may work in a literary novel. Yet in a genre romance novel, readers typically expect that lovers will be united.

What makes an open-ended story satisfying? It allows the reader to imagine, to fill in the blanks. Without a guide for how we should interpret the final scenes, we’re free to decide for ourselves what they mean.

An example of an open ending: An anti-hero killer ends up relocating and going incognito. This ending was used by the writer’s of the Showtime TV adaptation of Jeff Lindsay’s Dexter series. Not giving a final conflict or confrontation leaves room for future installments.

J.K. Rowling took a similar approach in the final book of her Harry Potter series. (Rowling however also advanced the timeline several years, with her characters shown as grown adults in her epilogue. This was interpreted as a way for the author to convince her devoted readers there would be no more stories involving her characters’ teenage years.)

Even though this type of story ending leaves some room for imagination and interpretation, make sure that you:

Another type of story ending is the ‘full circle’ closing. Here, everything returns to how it all began:

If you prefer a stronger sense of an ending, the ‘full circle’ story ending can be highly satisfying. This is a particularly effective way to end a book if your story began with a mysterious, unresolved situation. [Brainstorm the starting and ending scenarios for your story using Now Novel’s step-by-step process.]

David Mitchell’s novel Cloud Atlas is an excellent example of this type of novel ending.

In his sci-fi adventure novel, Mitchell hops between eras and locations from section to section. Each section ends on a cliffhanger or with an unknown unexplained. The author resolves each story arc in reverse order from the middle. This creates a sort of mirror structure around the central post-apocalyptic section.

Cloud Atlas ends with the resolution of the first interrupted story arc. We learn the fate of a character taken ill aboard a ship, and a shocking twist about a primary relationship for the character. Mitchell thus returns us to the first set of characters, and the novel’s first time setting and style (the first and last sections are written as journal entries at sea). This mirror or cyclical structure gives Mitchell’s novel a particularly satisfying sense of completion.

Shocking story endings that surprise us with a major twist are also effective:

3. Pull the rug from beneath their feet: Shocking twist endings

The plot twist is a typical ending for the short story. Famous short fiction authors such as O. Henry and Edgar Allan Poe mastered the ‘twist in the tale’ ending. Yet this can also be a satisfying ending to a longer work of fiction. Masters of the surprise ending include the authors Kazuo Ishiguro and Ian McEwan.

Alec Worley, in his post ‘The 5 types of twist ending’, lists the following types of story twists:

How to end a novel with a reversal: the 5 types

An ending doesn’t have to be shocking or surprising. Yet surprising reversal endings give readers the uncanny feeling of having been duped. This sense of surprise can make your climax more dynamic and exciting. 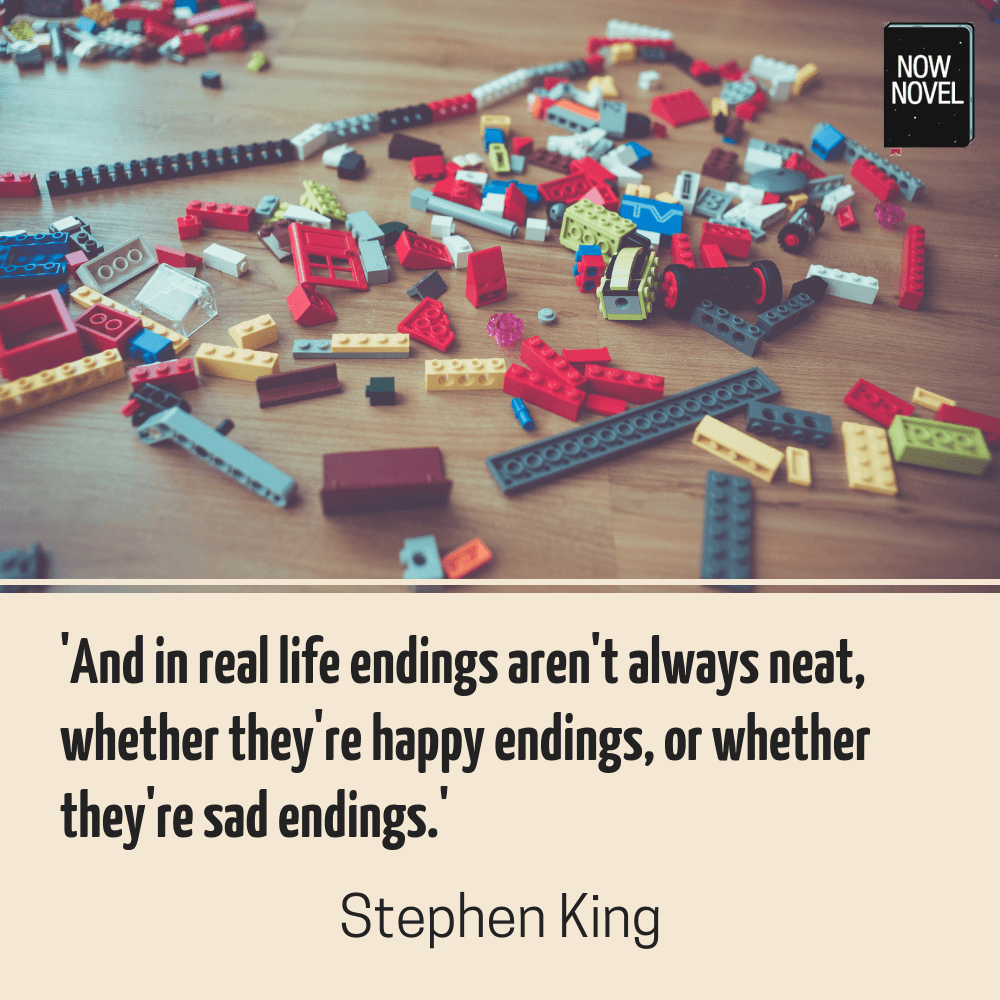 A twist ending, especially a shocking, discomforting one, carries the risk of angering readers who were looking forward to an expected resolution. Sometimes you’ll simply want to give readers what they expect and desire of a novel in your genre.

A tidy wrap-up can be comforting and reassuring – it’s why most childhood tales end with ‘happily ever after’ (or simply the reassuring finality of ‘the end’).

Even if a tidy ending feels a little too predictable, there are ways to make the wrap-up more interesting:

5. Build in ‘What if?’ – Cliffhanger endings

If you want to explore your fictional world further over a series of books, cliffhangers are effective story endings.

Think of how screenwriters handle plot arcs in thriller TV series. While each major plot arc of each season is mostly resolved, there is something left over that leaves viewers hankering for the next season to start. The bodyguard’s ward may be killed and they fail in their main task, but they (and us) still need further answers. Who was the culprit? What was their motivation?

Think of each book in your series as a season. Building the ‘what next?’ into your closing chapter will keep readers on the lookout for your next installment. It also helps to stop your resolution from feeling too tidy and convenient.

There’s no reason why you should have to stick to just one of the story ending types listed above.

There’s no single correct answer for how to end a novel. A simple return to the beginning can be effective, but the way David Mitchell returns to the beginning in Cloud Atlas with new information is both complex and satisfying. It’s a combination of a ‘full circle’ ending and a final twist.

Explore ways you can combine different types of ending to provide some surprise and some satisfaction. 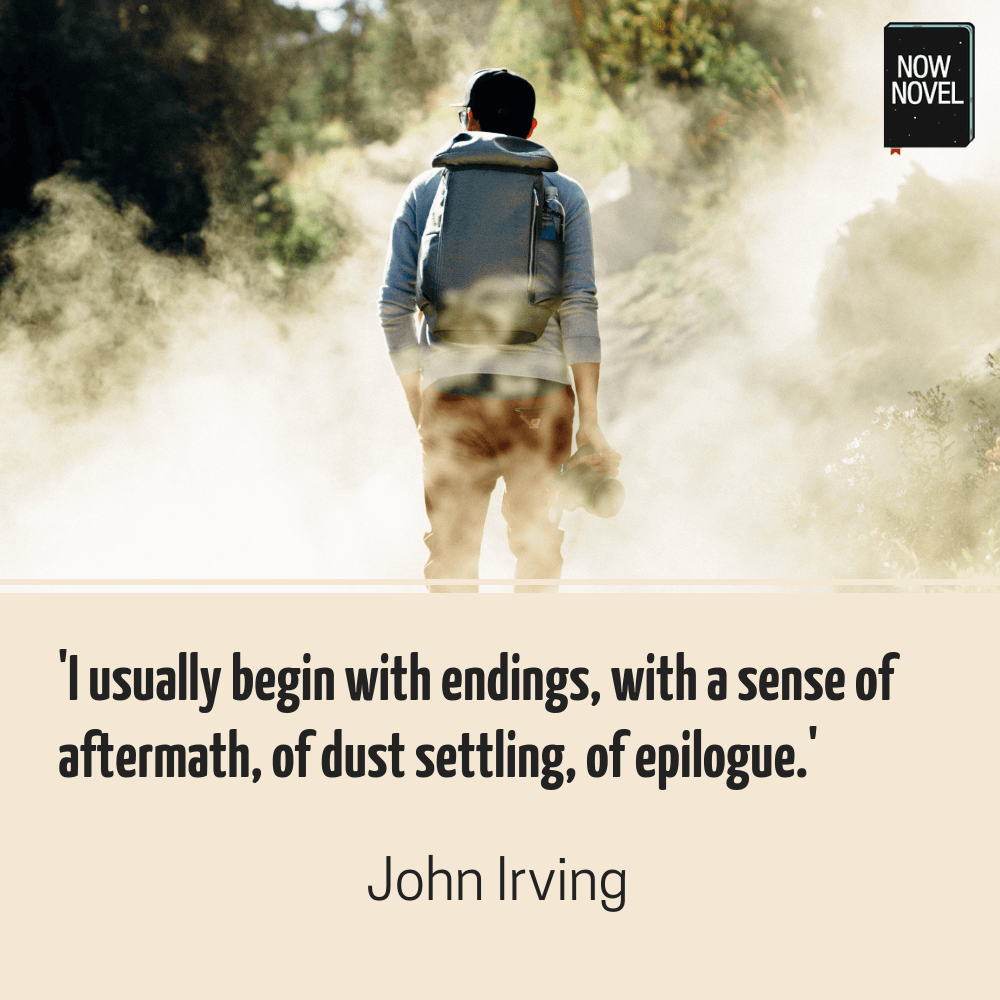 Some story endings feel hollow and unsatisfying. Here are novel endings to avoid in your writing: