The setting of your story is key to readers being able to imagine ‘being there’. How do you describe a place so it is characterful and contributes effectively to your story? Try these 6 tips:

We feel connected to place in a story when we see it through characters’ senses. Bring senses such as sight, hearing, touch, smell and even taste (there’s edible wallpaper in Charlie and the Chocolate Factory) into your setting. Using every sense might not make sense for your book, yet it’s possible. In Roald Dahl’s children’s classic, set in a sweet factory full of wonder, it somehow makes sense even the wallpaper is delicious.

When describing places in your story, think about tone and mood. Should this setting be intimidating or welcoming? Ancient, dusty and arcane or ultra-modern and spotless? What does an ancient, dusty mood smell like (old books? Damp carpets?).

Use the ‘Core Setting’ section of your story dashboard on Now Novel to brainstorm descriptive elements and create more detailed settings.

In Margaret Atwood’s novel Cat’s Eye (1989), the protagonist Cordelia recalls her childhood in flashbacks. Here, Cordelia describes her childhood home, when her parents would throw bridge (the card game) parties:

Then the doorbell begins to ring and the people come in. The house fills with the alien scent of cigarettes, which will still be there in the morning along with a few uneaten candies and salted nuts, and with bursts of laughter that get louder as time passes. I lie in my bed listening to the bursts of laughter. I feel isolated, left out. Also I don’t understand why this activity, these noises and smells, is called “bridge.” It is not like a bridge. (pp. 168-169)

Atwood uses sound and smell to paint an idea of the strangeness of being a child in an adult’s world. She uses the young Cordelia’s senses to create place and this puts us in the scene, as we experience young Cordelia’s surrounds through her perspective.

2. Include time period in description

‘Time’ is an important aspect of setting. This is particularly so in historical fiction. Details from the types of buildings and shops that line the main road of a city to individual details of people’s clothing and speech contribute to a sense of when the story happens. A story set in 1950s Chicago will naturally have very different buildings, cars, and people, than one set in the late 2000s.

How do you describe a place so the reader can sense the time period? 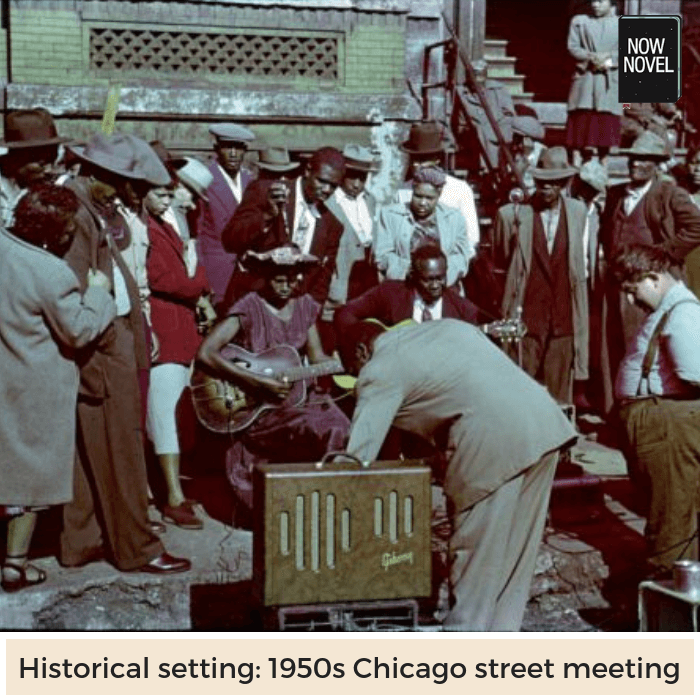 In Alice Munro’s semi-autobiographical collection of stories, The View from Castle Rock (2006), the Canadian author traces the history of her Scottish ancestors. Here, she recalls the simple ways of village life in the 1700s, describing the life of her ancestor William Laidlaw:

The first story told of Will is about his prowess as a runner. His earliest job in the Ettrick Valley was as a shepherd to a Mr. Anderson, and this Mr. Anderson had noted how Will ran straight down on a sheep and not roundabout when he wanted to catch it. So he knew that Will was a fast runner, and when a champion English runner came into the valley Mr. Anderson wagered Will against him for a large sum of money. (p. 9)

Munro goes further creating period in her setting by describing the clothing Will receives in reward for winning the race against the English runner:

Mr. Anderson collected a fine heap of coins and Will for his part got a gray cloth coat and a pair of hose.

The reference to hose, which men don’t typically wear in modern times, further places the story in earlier times.

3. Include small-scale changes in time

In addition to creating the broader sense of time or period, you can use small-scale time (such as time of day or the way place changes week to week or month to month).

Think of how time of day and physical changes to a place in time can both contribute tone and mood.

For example, if a city is bombed over a week’s period in a story, what does it look like at the start versus at the end? As an exercise, describe a sleek, modern city in a few sentences. Then describe the same elements of the city after a week of civil warfare. What has changed and what mood do these changes create?

Including time of day can create moods such as:

Weaving in details of time of day as well as the way places change over a day, week, month or year will create a sense of your setting being a dynamic, active and real place.

Example of effective use of small-scale time in writing setting

In his historical novel Oscar and Lucinda (1988), the Australian author Peter Carey describes a stormy nighttime scene where the lights in Oscar’s family’s home go out:

There was no torch available for my father because I had dropped it down the dunny [toilet] the night before. I had seen it sink, its beam still shining through the murky fascinating sea of urine and faeces… So when the lights went off in the storm the following night, he had no torch to examine the fuse-box. (p. 3)

Carey weaves a succession of nightly events together to show the frustrations of Oscar’s father. This use of time, coupled with the stormy setting, creates tension. When the father asks Oscar’s mother where the fuse-wire is, she says ‘I used it…to make the Advent wreath’ [for the church].

Oscar’s father’s response is to blaspheme. The mother, being devout, makes them all kneel to ask God’s forgiveness.

Carey ends the scene showing a change in the setting and how the mother interprets it:

We stayed there kneeling on the hard lino floor. My brother was crying softly.
Then the lights came on.
I looked up and saw the hard bright triumph in my mother’s eyes. She would die believing God had fixed the fuse. (p. 5)

Carey masterfully uses a tense nighttime setting and situation (lights going out in a storm) to show different family members’ personalities. The mother’s response is to turn to her faith, the father’s to think of practical matters like finding fuse-wires to fix the lights.

The stormy nighttime setting provides a dramatic backdrop to the action, giving both the cause for the situation and the mood of the scene.

4. Show how characters feel about your setting

Bring your character’s personalities, passions and histories to bear on the setting details they notice and describe.

We often return to this example because it’s an effective description of setting and the feelings it evokes:

124 was spiteful. Full of a baby’s venom. The women in the house knew it and so did the children. For years each put up with the spite in his own way, but by 1873 Sethe and her daughter Denver were its only victims. (p. 3)

This is the opening to Toni Morrison’s Beloved (1987), describing the haunted quality of her protagonist Sethe’s family home. Morrison immediately creates a sense of feeling in her setting description. Describing her characters as ‘victims’ of the house makes it clear it is a place of trauma and suffering.

Morrison continues to convey the character of place brilliantly:

The grandmother, Baby Suggs, was dead, and the sons, Howard and Buglar, had run away by the time they were thirteen years old – as soon as merely looking in a mirror shattered it (that was the signal for Buglar); as soon as two tiny hand prints appeared in the cake (that was it for Howard). (p. 3)

Morrison lists interesting, mysterious details about the haunted air of 124, and the different details of place that are the final straws for individual members of Sethe’s family.

Overall, the effect of her place description is to create a sense of hostility and ‘unhomeliness’. We have a clear sense of the emotions place produces or reawakens.

Often writers starting out try to describe every little detail in painstaking detail. Others describe everything in broad generalizations. Each have pros and drawbacks. The advantages of detailed place description are:

The cons of detailed description are that it can slow narrative pace and clutter your prose.

Being too broad and abstract has its own cons, however. If you describe a high street, for example, and say ‘The shops all have lavish window displays’, we don’t see any difference between them.

It’s often best to balance a little relevant detail here and there with broad description elsewhere to give both the specific qualities and the general feeling of a place.

What is relevant setting description?

It’s description that is:

In his novel Love in the Time of Cholera (1985), Gabriel Garcia Marquez describes Dr. Juvenal Urbino as one of the most respected men in the Carribean town where the story takes place.

Here is description of the doctor’s arrival at a party in the middle of a storm:

In the chaos of the storm Dr. Juvenal Urbino, along with the other late guests whom he had met on the road, had great difficulty reaching the house, and like them he wanted to move from the carriage to the house by jumping from stone to stone across the muddy patio, but at last he had to accept the humiliation of being carried by Don Sancho’s men under a yellow canvas canopy. (p. 34)

This is a simple, effective example of relevant setting description because:

6. Make a list of adjectives to describe your story locations

Learning how to describe a place means also broadening your vocabulary with words that capture setting. There are so many adjectives to describe an ‘old’ building, for example. Each of the following terms describe age, yet with different shades of meaning:

Even if you don’t use every word you find, this exercise will help you pinpoint the mood of a place. Think about elements such as a place’s:

Find adjectives that convey these qualities in a way that make place more specific. ‘Venerable’, for example, suggests respect that comes with age as described above. ‘Decrepit’, by contrast, suggests falling apart and ugly with age.